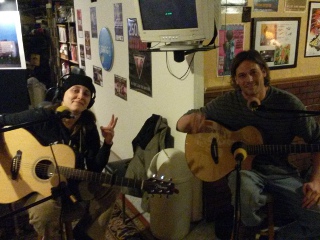 I think I'm probably one of the few people who went through and read all about setting up custom friend lists and the so-called "smart lists" (which are anything BUT) inside my Facebook account.  Mostly this is just to separate people whose posts I want to read, from people that just post endless felioreligiopolitical tirades, from people I don't actually know in real life whose personal drama I'm not terribly interested in.  It also allows me leave groups out of certain posts about personal drama of my own that I know they don't want to read.  See how courteous I am?  By the way, if you're a fan of Indy In-Tune, and you don't actually know me, then certainly I will accept your friend requests, but there really isn't going to be anything you want to read on my personal timeline.  It all goes over to the Indy In-Tune Facebook page.  Now, having already grouped my collective followers into one or more groups by professional contacts, old friends, clients, relatives, inner circle, out of town friends, etc. it recently occurred to me that the largest of these groups by far is one called "music scene," which accounts for 620 out of 730 of you.  So, yes, it seems almost 85% of the people I know are musicians.  So, I suppose it should be such a surprise to me when a couple of them pair up, even though it is.

The Pit and the Core is what, just a few years ago, I would have considered a very unlikely union between roots rocker Megan Hopkins and progressive blugrass/jam-band master Dave Vogt.  It's not that I didn't think they wouldn't hit it off (we've all hung out at the same Wednesday open mic for years) or that the music wouldn't mesh (Dave is like tofu and will fill in anywhere he is needed), it just never dawned on me to even picture something like that.  I'll tell you though, it works.  While Megan has an infamous voice and undisputed songwriting ability, she will admit that having only played for just over a year, her guitar stylings are still very basic.  Dave, while commanding a very unique and flashy instrumental style, is very a very eclectic player who commands a very loyal, but not very mainstream, following of fans.  Combined, they are able to compliment each other extremely well by playing to the strengths and around the weaknesses of the two distinct parts.  I look forward to seeing where this project goes.