Show #176: Werewolf with a Shotgun 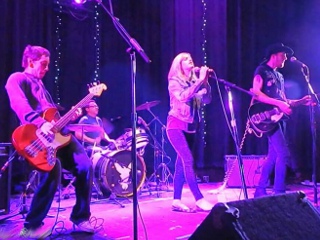 Insanity continues to reign with our "Busiest Year Ever."  It's starting to work like an assembly line, finally.  Well, an assembly line of one guy, anyway.  Fun challenge this weekend: the server that runs the radio side of Indy In-Tune (just the stream, track library, and webcam -- not to be confused with the web server or the podcast hosting server), decided to pack up and desert me the night before recording this.  So, no, it wasn't some conspiracy to hide the fact that Melissa from Werewolf with a Shotgun is actually Chris Spears doing a variety of silly voices.  She does exist and she really was in Studio B wearing a really cool hat.  As for the server, it was a ten-year-old Pentium 4 -- pretty much the technical equivalent of a 75-year-old man with emphysema and not worth anything except as a streaming server, but still in the prime of it's life compared to the 15-year old Pentium 1 that runs the website.  That beast, I might add, has never given me a lick of trouble, aside from the fact that it's running Windows 2000, and it's a bitch getting some of the newer software to run on it.  I did almost immediately have three or four offers to donate a new computer to Indy In-Tune, all of which were much appreciated.  In the end, it was Nick Tucker running a super cool-looking custom job of his, complete with transparent case, neon blue running lights, and extra cooling units -- seeing as how the beast is expected to be busy 24/7/365 ... much like me these days.

I fell in love with this week's guests, Werewolf with a Shotgun, at the 2013 Battle of Birdy's.  At the time we did a couple of live promotional spots with them (now lost to a hard drive crash (the week prior to the server crash -- see how my year is going?!).  I later booked them for the infamous PodConcert VI, where they brought the house down with the final set of the evening (see above reference to the hard drive crash).  Now, on the occasion of the first, long-overdue release, I finally get a permanent record of them on a Podcast, which if nothing else gives me a chance to tell, for posterity, my WWaS story, which most of you are probably tired of hearing by now.  We also learned a lot more about the history of the band, a bit of European history, and some zoology tidbits that, certainly I didn't know about.  Who says this show doesn't have some redeeming value?!