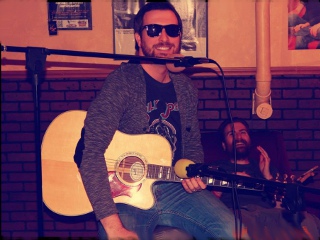 Singer/songwriters (or "singwriters" as I have accendially coined them) come in a lot of flavors.  There are lyrical poets, guitar stylists, the funky ones, the folky ones, the jazzy ones. While there are plenty of advantages to the "one voice/one instrument" approach, well, let's just say it's "confession time."  I think the trap that a lot of these artists fall into is (whether you're a random guy at an open mic, or a master songsmith like Bruce Springsteen) the same voice and the same instrument sound really cuts into my attention span after 20 or 30 minutes.  I can name ten Rock bands that have made successful careers writing the same song over and over, and because they get to move around and interact with the crowd on stage, it works for them.   Singer/songwriters are generally nailed to one spot on the floor (or if they really want to suck the life out of their performance, a chair -- sorry, pet peve).  I'm not saying THE MUSIC is boring, because I do listen to and love a lot of singer/songwriter music.  I'm just saying, for me, it rarely translates to a live show.  As crazy as it looks at times, that jumping around and guitar posing bands do actually does add a lot to a live show.

Regardless, I listen to a lot of singer/songwriters, and, yes, I have my favorites.  chris Burch is one of them.  The thing about Chris' music for me is the amount of energy (perceived or otherwise) that's bottled up under his songs, even if it's never really released.  Chris, plays with such an intensity that I always feel like he's barely holding the lid down on a big ol' metaphorical box of rock and roll that's about to explode.  I don't get that impression with a lot of players, and the resulting tension is delightful.  I've got tons of great Chris Burch stories -- in fact, I'd venutre to say anybody who knows Chris Burch has at least a couple of their own.  Most of mine, out of respect for Chris and our friendship, I don't tell publicly.  Needless to say, I love the guy to death and -- despite the relative seriousness of this low-key interview -- rank him as one of the top five most-memorable personalities in the local scene when he's on.  As such When the chance comes to have him back in Studio B, even if it's really just to re-answer all the questions Irish asked him on the SoundCheck, I'm pretty stoked.