Show #184: The Cast of the Free Beer Express 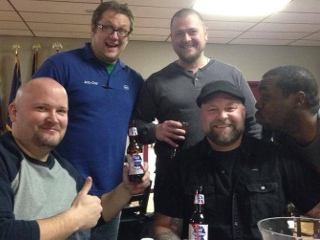 I've been a devoted follower of podcasts for over a decade now, and I will say my tastes have changed considerably.  Originally I listened to a blend of podcasts, mostly tech and scifi related, but later expanding into personal casts and storyteller casts.  Towards the end, I began delving into the freeform/comedy shows before that fateful day when I discovered the TuneIn app, at which point I dropped almost all podcasts not run by personal friends of mine and spent all of my waking hours surfing radio stations around the world.  Why download a show made weeks ago when there are still plenty of live voices on other parts of the planet who would be happy to get a tweet from you and exchange pleasantries or ideas in the middle of their show?  Thus, the push to move my own content from podcasting to a live environment was also born here at Indy In-Tune.  Still, I sort of always harbored a desire to be on a freeform comedy cast like Free Beer Express.

This week's show featuring the cast of that popular local podcast, marks my third attempt at doing a show/interview with another podcast crew.  These are nice little diversions, and I do for the most part enjoy them, but honestly I feel like I get my lunch eaten by them every time when it comes to quick-witted thinking and snappy comebacks.  FBE was one of the first shows to come out in what I consider to be the "Renaissance" of local podcasts, which now includes dozens of fine new shows that have cropped up over the past two years, along with a fledgling "Podcaster Group" that hopefully will se a lot more success that the old Indy Podcaster's Guild did. Sadly, while the state of local podcasting would have been a really cool thing to talk about during this show, we pretty much devolved into a discussion of beer and podcaster war stories, which is sort of what we do in real life as well.  Hopefully you'll enjoy those too.