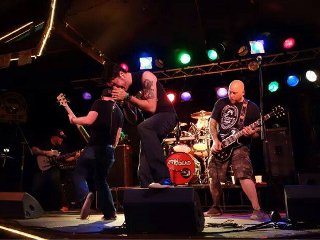 I've always striven (strove? strived?) to keep a balance of different acts on Indy In-Tune over the years.  Not always an easy task.  Surprisingly, Indianapolis seems mostly devoid of original Country Music, though there are some excellent cover bands in town.  There are similar arguments with blues bands, though there are a couple of really excellent ones I'm working on for you.  Meanwhile, jazz players are a challenge since most don't seem to care much for doing radio appearances to promote their craft, and since there frankly aren't any purely jazz radio stations in town anymore, it's probably not where their audience is anyway.  And pop bands in Indy?  Forget it.  Mind you, this leaves me with a fine selection of rock, metal (broad definition), and singer/songwriters to choose from, and I have no problems with any of these genres.  The trick, as I have found is, that once you have one band from one of these niches on the show, you will quickly be flooded with requests from other bands in that same niche.  Thus you will notice a trend of six or seven acts in a row from the same genre, thus destroying that "balance thing" I was talking about earlier.  So, here's me hoping we'll soon be inundated with hard rock/metal bands for the next couple of months, and wishing that this trick also worked with "girl groups" ... because, sadly, it doesn't.

Okay, so let me explain what's going on with this week's podcast.  It started out as one of our Saturday hang outs in Studio B and was intended to be a full podcast with members of Join the Dead.  Due to a hard night of partying, most of the band was missing in action, so instead we had a nice, pleasant chat with guitarist James Sweeny, and his girlfriend/JTD expert Danielle Parker discussing the impending CD release party and to promote their new album, Distorted Cognition, as well as a couple hours spinning some tunes from all over Indy's hard rock/metal scene.  Then, as fate would have it, Henry French showed up during one of the musical breaks, and James and Danielle had to leave for a prior engagement, which is why the show really doesn't have a proper signoff, and mostly just fades out.  It made much more sense if you were listening live, not so much when we attempted to edit it down to an hour podcast.  Still, we got a lot of kick-ass rock and roll in there for you, and James and Danielle are always a blast to hang out with, so it's definitely worth a listen.