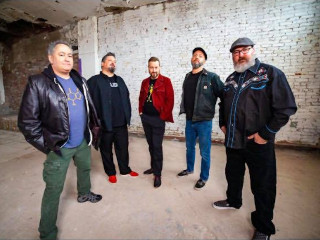 It is good to be back and talking to great local artists again. There are still a few little glitches with the new software (sorry, a couple of the mics are a bit hot on this episode ... it shouldn't detract from great music though), I'll blame the idiot who wrote it. Also, please don't freak out that I'm actually getting these shows out regularly and on time for once. I'm sure I'll lose energy in a couple of months and be back to sporadic releases again, but for now, we seem to be firing on all cylinders down in Studio B. This week I'm thrilled to have some old friends in the studio for the first time talking about their main work, and merely eluding to the half-dozen other projects, cover bands, and guest appearances they make in a typical year. Who can blame them though, these are some of the finest, most well-respected players in the city.

Coolidge began as a side project for guitarist/singer Chris Smail during the heyday of Johnny Socko, which was one of a handful of local acts to achieve national attention back a few years ago, and still serves as a common touchpoint for anyone who was young and vibrant then. That said, this is a noticeably different project, albeit with a similar sound. Their long-awaited new album, "Condition Transmission" arrived a couple of months ago and is everything we needed during that difficult time. It's rare in local music to find artists who are both this good and have played this long together, and the result is an absolute joy to behold when deceptively complex music can sound like it was so effortless to play and still be so much damned fun on the ears. Check them out next weekend at Black Circle Brewing and look for some special releases on their website in the coming months.