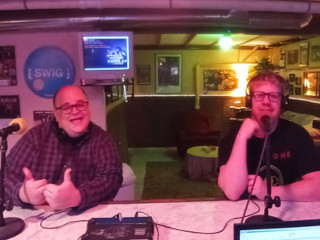 It's been a long year-plus we've been buried in Studio B. During that time we've had another flood ... another mass cleaning ... another redecorating ... rebuilt the console/bar to be even better than it was before ... and spent a lot of time trying to hunt down anyone in the local scene who was still putting out new music. Fortunately, we found a few, and yesterday we celebrated our newly vaccinated arms by inviting four bands who managed to stay creative and active to share and discuss their recent works. We're also happy to say, we broke a rating record doing it, so it's safe to say, it sounds like you guys were in the same boat we were craving a little interaction and a lot of cool tuneage.

Oddly enough, I've been a fan of The Circle City Deacons for several years, and -- as I learned -- have nearly crossed paths with them a couple of times in other projects, but this was the first time I actually got to sit down and meet them. While their released output has been at a low simmer since the release of the 2014 album "Welcome Home," the last year or so has seen the release of three new singles, all of which gave that bright, upbeat sparkle to an otherwise dreary time. With Indy, hopefully, opening up again soon, I can't wait to finally get out and see this group play live again and infect the city with their seemingly unlimited energy and fun.