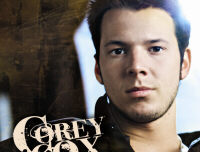 Anyone who spends time with Nashville recording artist and East Central Indiana native Corey Cox knows those words are more than just lyrics in a song.

Trust, values and family are the key principles in the career Cox is building. And, as the rising singer/songwriter says, the ride is just beginning.
The ride Cox refers to started in the small Indiana town of Pendleton, a historic community with a population near 3,100. Located 20 minutes from Indianapolis, the quaint community provided the backdrop where Cox learned the benefits of family, friends, hard work, playing sports -- and listening to country music.

Despite being a multi-sport athlete in high school and playing college baseball at Anderson University, it was only after receiving a guitar at the age of 15 in which his life would be changed forever.
Although Cox was focused on his college education and playing baseball, he still played music when he could. He formed a band consisting of several friends from high school and college, playing whenever his schedule -- and a willing venue -- allowed.

Since forming his first band just a few short years ago, Cox has packed many clubs and venues. His path to success has recently included stops across the Midwest and opening for several national acts such as Diamond Rio and Emerson Drive.
"I say this all the time, but I believe the best stage show is built off the stage," Cox says. "This business can be scary at times. However, with the support of my family, my friends and the many new fans we make each night, I think the sky's the limit."

As seen on the webcam. Are you one of those people who can't survive without copious amounts of coffee in the morning? You definitely need one of our stainless steel travel mugs. Give your caffeine the gift of style...
© 2006 - 2022 | Site design and coding by Darrin Snider | Content by Indy In-Tune and the Credited Artists and Writers | Layout by HTML5 UP