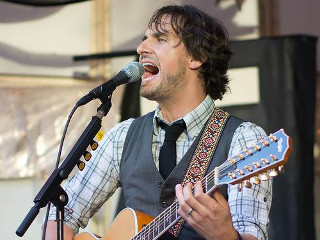 In early 2014 Jason Andrew Brown took the stage on a cold Tuesday night at one of the few local Indianapolis clubs known for original music. Alone on a big stage with just his voice and his guitar for the first time in his career, he played a 3-song set to a small but enthisiastic audience of mostly fellow musicians and was completely transformed. After two decades of fronting bands including ten years touring regionally with the rock band Push Down & Turn, Jason found fresh creative energy that opened the door to explore his deeper truths as a musician. His new self-titled EP is a culmination of a burgeoning new career as a pop/rock/Americana driven singer/songwriter. It's 5 tracks display his maturity and range as a vocalist, lyricist, guitarist, and composer.

"Performing solo is an entirely different discipline from fronting a band," Jason says. "when it's up to one person to make all the music and give a compelling show, vocal dynamics, well-crafted lyrics, and storytelling become the key differentiators of the pros from the amateurs. Aspiring to be a pro, I've been hard at work on my lyrics, singing, and arranging ever since." Focusing on those aspects of songwriting has proven to be the stuff of engaging solo-acoustic performances and the foundation for deeper sonic atmospheres when Jason performes with his band live and in the studio.

Jason brings a robust musical pedigree to support his emergence as a solo artist. With Push Down & Turn, he toured full time throughout the U.S., playing clubs, festivals and colleges and supporting high profile bands like Counting Crows, Bush, Widespread Panic and The Bodeans. They also played the H.O.R.D.E. Festival with Neil Young, Primus, Toad the Wet Sprocket and others. Years of heavy 6-7 night per week touring made Jason a seasoned performer, but eventually he felt compelled to leave the comfort zone of Push Down & Turn to try a new musical direction.

In 2003 Jason formed the band Sedna where he and another songwriter, James Weston shared songwriting duties and spent several years recording songs in Indianapolis and Nashville. Those years with a songwriting and recording focus complimented Jasons earlier years of steady touring and established his love for songwriting. When James moved away in 2006, Jason and the remaining members of Sedna played clubs and events around Indianapolis until 2014 as a popular local band called Cousin Roger. Always a "proud son of Indianapolis" Jason continues to play solo-acoustic and with duos and trios and even 500-1000 seat venues with his band. He's also performed everywhere from Vancouver and New Orleans to Kobe, Japan and Munich.

Jason sums up his stylistic approach by saying, "If I feel like my song is approximating something I've heard before, I take a hard-right turn". He certainly isn't afraid to take on difficult subjects. In the wistfully plaintive "Emptiness is Forever" he eulogizes an old friend who always made Jason feel welcome, but tragically committed suicide years later. The hypnotic ballad "Icarus" is a tribute to a man photographed falling from the towers on 9/11 and the thoughts he must have been thinking in his final moments. "Stranger" is an unsettled argument between Jason and his former self. On the other side of the spectrum, "Make Time" is a rock/soul driven manifesto on essentialism in a world that is increasingly distracting and "Shine Sun Shine" is a happy lark through a bright Indiana summer day.

This record is an introduction to what Jason Andrew Brown is all about; integrating a love for lyrics and singing into arrangements that cast his songs in different colors to see what emerges. "If there's one thing I want to demonstrate, it's range. Whether it's subject matter, vocal dynamics, or musical texture, I hope people will find themselves in a different sonic landscape on each song with my voice to tie it all together into a cohesive collection."

Back by popular demand for a limited time only, "I support local music ... and yes, that does make me better than you." Show the world that you, too, are a proud elitist music snob! Get yours before time runs out...
© 2006 - 2023 | Site design and coding by Darrin Snider | Content by Indy In-Tune and the Credited Artists and Writers | Layout by HTML5 UP