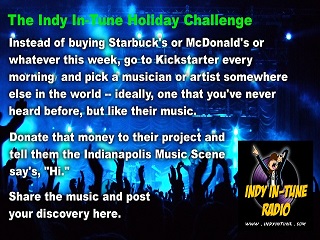 Okay, folks, we're nearing the end of the first week of the Indy In-Tune Holiday challenge, and I have to say, this whole "giving spirit" thing has been an absolute blast. When I think back to nine years ago or so when Indy In-Tune was a fermenting idea in my alcohol-soaked skull, one of the things that made it really appealing was the chance to meet new people, make a few friends, and hear some great music. What I've come to realize in the years since then is that ... well ... I've met all you people. This has been a real chance to connect with a few artists regionally, nationally, and internationally in order to spread the word that Indianapolis has a unified music scene, and we support our musical peers everywhere.

Just to recap, I previously posted about how all this got accidentally started. What I haven't done is get everyone updated as to how it's going. So, first off, let me say a big thank you to everyone who embraced, ran away with, or at least helped spread the word about this idea. Quite a few of you jumped on it -- not as many as I had hoped -- but I think everyone "gets" what we're trying to do here.  Since it really was an impromptu idea on a Monday night, and not really announced until Tuesday, I know everyone kinda feels like it was sprung on them at the spur of the moment, so hopefully we can pull some more into the fold for a second week. Next, I had no idea this would become really friggin' addictive. I've had so much fun with this, and since not everything I've backed looks like it's going to get funded, I'm going to keep it going for at least another week, and maybe through the holiday itself. So, I invite everyone to jump in, even if it's just two or three bucks sporadically over the next few weeks. Honestly, it's all about the people, not so much the dollar amounts. You'll meet some very cool musicians who are thrilled that their music was heard by a stranger, and you'll gain a lot of paid-forward karma points if you're into such things.

Just to recap where I'm at, personally, and to inform everyone of some great projects, in case they want to boost my own humble efforts and make a more substantial contribution in the name of Indianapolis Music...


So that's where we are. How did you guys do? What did you find that you had to get behind? Who's up for another week? I know I am.