Monday Mixtape: Excerpts from the Summer of 2014 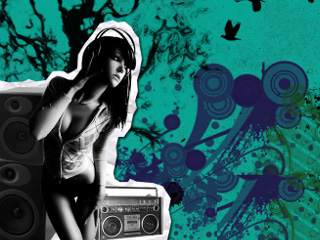 Did you ever go through an old drawer or discarded hard drive and come across just a strange collection of items that made a neat, tidy snapshot of what seemed like your entire life at the time, but in fact is just a forgotten blink of feelings and thoughts that you barely remember now? I recently had such an experience, and while I'm currently destroying all of the evidence, I did find one item worthy of study and sharing: a playlist. This is also fortuitous, since I didn't have one prepared for this week, and I'm doing my best to keep current with these things.

So, it's the summer of 2014. Not exactly a stellar time to be me to be sure. By the way, if you knew me then, I'll just go ahead and apologize now. This playlist, which originally consisted of 24 methodically chosen and ordered tracks and a central theme, was in heavy rotation during my work day monotonously analyzing voter registration patterns in Indiana. The original context, the number 24, and the specific order the tracks were put in are no longer relevant, as this is a sub-selection of ten tracks that I was obsessed with at the time, but somehow have completely forgotten about for the past six years. A few of the remaining 14 tracks have already appeared in other mix tapes, and the rest may appear in the future.

Point being, unlike previous mix tapes, don't rack your brain trying to find the meaning, it means nothing to anyone but me. Just enjoy some largely-forgotten tacks today.

Bibio -- Take of Your Shirt Am I reading too much into this song, which initially comes off as a party song, but upon examination of the lyrics, is a whole lot darker? Even the title doesn't mean what you think it does, and for once, the repetition of the first verse carries an ominous statement other than, "Well, we couldn't think of a third verse..."

Bombay Bicycle Club -- Lights Out, Words Gone Was this the last CD I bought at a store? I remember hearing a different song of theirs on The Bandwagon (Radio Teesdale), buying the CD, and playing in my car for a year. Somehow I completely forgot how much I loved this band after that. Of particular interest is the way they just meticulously layer single notes and simple chords on top of each other and create this giant wash of sound, almost as if they're pulling energy out of the conspicous absense of energy.

Black Grape -- Kelly's Heroes A collaboration between memebers of a rock band and hip-hop band to produce an electric-funk/pop rock band. It really shouldn't work, but with the right amount of tongune in cheek, I really feel like it does.

Barry Adamson -- Black Holes in my Brain Considering he's worked directly with, or remixed, a bunch of other artists that I really like, I'm surprised I went as long as I did without discovering Barry Adamson. Kinda glad I did though.

Palma Violets -- Best of Friends You know, for once I'm completely at a loss. I know almost nothing about these guys, other than they were big in the UK for a while, but not so much here. I can't even remember where I first heard them, so I can't give credit and thanks to that genius.

Arthur Beatrice -- Carter Okay, so Bibio is really one guy, and Arthur Beatrice is actually four people. You could blame me for getting confused, but the one cool thing about this band is that reached a certain level of success without doing press, and strictly promoting via indie blogs and social media -- making them probably the only band who was actually good enough to do this.

The Dreaming -- Bleed On the other hand, some bands gained their fame through a meticulously crafted marketing deal allowing them to infiltrate suburban malls across the country through a relationship with Hot Topic clothing stores. I still like the track, and will leave it to you to figure out why it's on the same playlist as Arthur Beatrice.

Wintermute feat. Hatsune Miku -- Jupiter Pop Now you're really getting confused, aren't you? We're going from a band that's a guy, to a guy that's a band, and now a girl that isn't even real.

dEUS -- Dark Sets In There aren't a lot of Belgians in my music collection. Or maybe there aren't enough?

Rose Windows -- Native Dreams KEXP is such a damned treasure, I wish every town had an equivalent. Whenever I find a new band I like and I'm wondering if anybody else has heard of them, sure enough, they've already done a studio concert on KEXP. If you're not watching this channel or listening to the station, you really need to step it up.