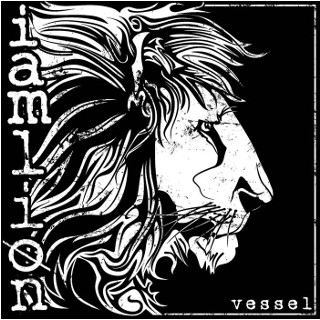 I have to admit, I was nervous about doing a review for IAMLION's new EP, Vessel, simply because of the stylization of the name. My fears were deepened when I saw they were opening for Slipknot at Klipsch on August 14th. It brought me back to my days as a scene kid, and I was afraid I was in for yet another trip down a screamo-filled memory lane (not that there's anything wrong with that; if you're in the mood.) They are very serious about being categorized as rock and roll, considering that their About' page on Facebook mentions rock and roll five times within nineteen short lines of text. After listening to Vessel, I must say I have to agree.

The first thing that popped into my head when I heard the tracks was, my mom would really like this. This may seem like a negative thing, but my mom happens to have bitchin' taste in music and usually gravitates more towards straight-up rock. Because IAMLION's sound is pure, modern rock and roll, it appeals to a wide variety of ages. Vessel has a ton of energy without being in-your-face with its intensity. IAMLION embodies everything about a garage-rock-band gone right.

Rob Sprowl on vocals struck a familiar note, and I realized he sounds very much like a Midwest Robin Zander of Cheap Trick (the similarity in names gives me immense satisfaction). I'd also like to include a shout out to Nathan Gray on account of his really nice bass licks. I dig, dude.

If these guys haven't been in the game for awhile, they certainly fooled me. I feel as though a few of the lyrics tap dance on the line of being cheesy, but if you're at a rock show, that's probably the last thing you're thinking about. The instrumentals are skillfully developed and executed. They play with intention; I can tell exactly how the band has decided they want to make the audience feel, and they effectively convey that mood (no spoilers, but it's a message you'll want to hear.) Vessel is clean and well mixed, which is something I deeply appreciate as someone who has heard many a musically muddy track. Essentially, it's a pep talk that's easy to listen to.

IAMLION reminds me of a few bands I've seen live before. They aren't similar in style, but in talent. We've all been to a concert for the headliner, and you expect to have to sit through the opener. There is that rare occasion, however, when they actually turn out to be really amazing, and it just pumps you up even more for the rest of the show. This isn't to say that IAMLION couldn't headline, but everyone has to start somewhere, and being really good certainly doesn't hurt your advancement opportunities.

IAMLION's sound reminds me of Red Sun Rising an Ohio-based group, who toured with Seether this past spring and has been picking up interest since then. Perhaps opening for Slipknot will help our local guys get on the bigger scene!

Bottom Line: Once again, I must express my appreciation for the pure artistry in this EP. These guys know what they're doing and they do it well. They deliver a purely hard rock sound. I imagine they would put on an incredibly high-energy live show. They'd probably wrap it up with a sick guitar smash if they could afford to ruin a perfectly good guitar.

When/How to Listen: Trying to keep your energy up while doing something boring like cleaning or painting.