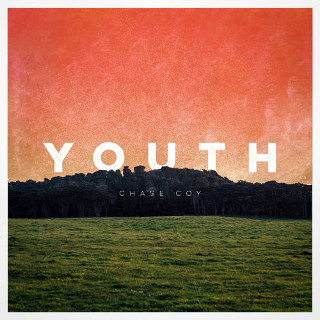 Chase Coy is described as indie-folk, a genre I am familiar with but not deeply invested in. His album, Youth has earned adjectives such as, despicably fun (Earmilk) and cool, fresh, charming and easy to listen to on a loop (Baeble). I'd have to say his sound fails to strike me as fun, but it's certainly not anything heavy on the ears.

Each song is a roughly 50/50 mixture of a light, twangy ballad, and a calm, synthy advice column. None of the country-sounding notes are cheesy, which I really respect in an album, as it's very easy to cross that line into cringe-inducing territory. A few songs such as Youth and You'll Always Love Her tip this balance to a 60/40 ratio, but for the most part, it's a pretty even mixture. The entire album is like smoke in that it curls and drifts aimlessly without any particular place to be. No song in particular stands out to me for any reason other than that I just like the lyrics. It's so cohesive that it may even be difficult to pick where one song stops and another starts if there weren't breaks in between and the listener wasn't paying much attention.

Coy's voice itself is very soothing. He's very talented and wherever he got his training served him well.

The lyrics are well thought out. For the most part, they don't really tell a story. I imagine Coy thinking his chorus lyrics up in the middle of a conversation as he evaluates his opinions on the situation and saying hang on, as he writes it down on a bar napkin. Nearly all of them either describe something he wants someone to do or something wants to remind them of. They're short and sweet; the kind you might see written on the ribbons on someone's sparrow tattoo. They would almost sound like poems if they weren't repetitive.

Youth would be perfect for background music for writing a paper in the ungodly hours of the morning. The more exciting tones would help keep you awake, while the overall calming mood would prevent you from shaking too hard from the almost-overdose inducing consumption of caffeine you've put your body through. There are no surprises, so it's actually really hard to let it distract you or to even focus on one song for the entire duration. If that's what Coy was going for with this album, he hit that nail on the head harder than I hit the snooze button after writing the aforementioned paper.

Bottom Line: If you're looking for an album to pay attention to, find a different one. If you need something to serve as background music for a calm activity that requires concentration, look no further. Chase Coy's Youth is a gentle collection of similarly calm yet distinctly different songs that are perfect to not pay a whole lot of attention to.

When/How to Listen: While doing something else, slightly relaxed, emotionally neutral.

I'm not currently familiar with anything directly comparable with Youth, but I'd say it sounds like a mash-up of Vance Joy and Early Ra Ra Riot. If you're into both, check it out!