The Hat Madder at Melody Inn with SugarDust and Middle Class 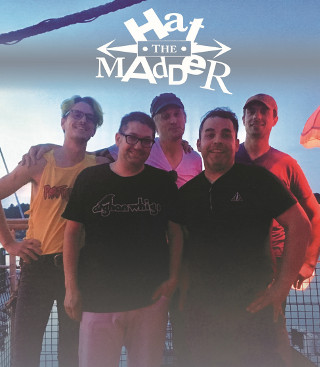 Friday, October 5th three talented rock bands from New York, Michigan, and Indianapolis will invade the Melody Inn to rock all of our faces off.

The Hat Madder is a 5-piece from Lansing Michigan whose 4th album Rotting on the Vine on GTG records is an epic 12-song rock and roll voyage into places you never knew existed, but are glad that they do.

If GTG records sounds familiar, it should.  The Hat Madder is the third band on this Michigan label to play Indianapolis in the past 12 months.  Jeremy Porter and the Tucos played at The Mel, as well as The Knickerbocker in Lafayette, as well as Fort Wayne late last year/early this year, then The Stick Arounds came to The Melody Inn over the summer, and now The Hat Madder comes to us at the beginning of Autumn.  These labelmates are three very different bands with very different sounds but are all extremely talented and definitely worth a listen!  After hearing these three bands, it makes me know that when I see the GTG label, I can expect great music.

The Hat Madders vocalist/guitarist/all around musician-extraordinaire Isaac Vander Schuur was kind enough to take time out to answer some questions about their musical origins, most recent album, and their upcoming show at The Melody Inn on Friday, October 5th.

Amy@indyintune:  When and how did you all meet, and when did you start playing together?  Are you all from Lansing?

Isaac from The Hat Madder (THM): I started the band back in 2004 in Austin, TX--originally from Michigan though--and new several Hat Madder members prior to that in Lansing. Chris Baratono Ive been involved with musically on and off for the past 20 years. A lot of the other positions have been a revolving door but, Nick Merz has been with the band for quite a while with a position change from Bass to Guitar/Keys/Noise/Horns/Vocals. Hes a really talented guy and it shows on the recordings. John has also been in the band for the better part of 6 years. Cody has been with us since May of this year. Other than that, the Lansing music scene is a tight knit group of really talented people and were always trading members back and forth.

Amy: You have quite the extensive list of influences on your band page, (from punk to classic rock to 90s rock to heavy metal, to prog to power pop) and it shows in your musics diversity and versatility.  And you dont sound like anyone specifically of your influences, or anything Ive ever heard.  Have there been any specific artists you feel have influenced you or impacted you in a way more than others? (As a band, OR as individual musicians)

THM:  I know Chris and myself are really big Afghan Whigs fans from back in their heyday. Archers of Loaf, Beatles of course, The Cure, DEVO, TV on the Radio, the Breeders, Mission of Burma, Pixies and Brainiac are all huge influences as well. I celebrate Aimee Mann, Neko Case and Nina Simones catalogs frequently as I feel like Female vocalists have shaped my vocal style quite a bit or at least I aspire to that level of awesome. Falling short no doubt.

Amy: Haha! Nah, you have your own unique and interesting voice, for sure.

Tell me about the first time you recorded an album together.

THM:  As a band we just were in the studio this summer tracking a tune while on the road. But with our old bass player we were tracking as a band for the last record. Chris, Nick and John have shown up in different capacities on previous records. We are revisiting our first record with our old drummer Mark Jagmin this fall. Its a 10-year anniversary/revisit. We havent thought about most of those songs in a long while. Its fun getting back to them. We will be recording the results as a bit of a re-creation recreation. Ha!

Amy: How, if at all, has the writing and recording process changed for you from the first album to the most recent?

THM: This first record was mostly songs Id compiled on my own over the years and i worked on a ton with the Austin lineup, (Ricky Lenhart on drums, Erik Baio on Bass.) We did a lot of pre-production demoing and went into the Cavern in Tucson, AZ with my longtime friend Scott Bozack (whos worked on a lot of records and currently tour manages for They Might Be Giants). We piled all of our stuff into the studio and banged a lot of it out over a long weekend. Overdubs were done all over the place. A lot were done in New Orleans in various hotel rooms and back stage areas thanks to Scotts availability. But it adds a lot of character to the record.

The records after that were a bit of a mixed bag. Demos would in some way turn into finished versions. Some of the tunes would be just myself and a drummer. Others would feature a somewhat lengthy list of supporting studio musicians. I did a few tunes with Mike Horrigan (Brendan Benson/Afghan Whigs) on drums and bass. That was a great session full of a lot of synergy. Hes fantastic.

Amy: Talk a little about your latest album specifically.  It is quite the musical extravaganza packed into 12 songs.  How long did it take you to record, who recorded it, where, etc.?

THM: Rotting on the Vine was the first record we self-engineered and produced. We took a bunch of studio gear up to my familys old 1 room school house (up near Alpena, MI) turned it into a studio with isolation and multiple recording environments. The place was perfect. Especially the drum sounds. It took us 2 years to finish recording it. Add another year for mix/master. We released it last October and have been touring on it a bit over the last year. Were excited to get cracking on a new batch of songs.

Isaac: Bride of the Wood has a lot of meaning to me personally due to its subject matter, but I was happy to have tracks Swamp Water Death and Hunchbacks of Grace see the light of Day. Also, Im really happy of how Timmy Taylors Head came together. It was the last tune we wrote for the record and was conceived while we were touring. Came together quick and one of my faves to play live.

Amy: What is up with the song Emmanuel?  Its 00:36and made up of interesting sounds.  Reminds me of the sound it would make when some kid would bang something up against the big metal swing sets on the playground in elementary school.  Then, the track Red Ropes is also not a traditional song; do these two somehow go together?

THM: Yeah, this is weirdness territory... While we were working on the record there were some series of computer glitches in transferring them out. What we ended up with was a hacked up medley of various tracks in a stereo mix. I immediately was like This is a sign So what we devised was to take the corrupted tracks and run them through various pedals, triggers and vocoders and see if melodies presented themselves. The 1st track on the record is just that. When we play it live its a solid way to get into Timmy Taylor. The other 2 offerings were just accidental glitches manipulated to be interesting segues to give the record some continuity and break it up into essentially 3 acts.

Amy: How did you get hooked up with GTG Records?

THM: I met Tommy McCord and the Plurals in around 2008 they were into doing the same kinda stuff I was, and it became a fast friendship. I love all of those people. They are kind hearted, hardworking and make music a hell of a lot of fun.

Amy: Have you had a chance to do much touring?  What are some of your favorite places to play?

THM: Weve been touring steadily on and off for the past 5 years. Quite a bit when were trying to move vinyl copies of our record and gain fans.

Amy: Is this your first time playing in Indianapolis?  If not, do you recall where you played here before?

THM: We had played in Bloomington a few times but not in Indy specifically. So yes, our 1st time. Though it seems our labelmates have done a decent job of paving the way and warning everyone we were on our way.

Amy: (Jeremy Porter and the Tucos, and The Stick Arounds reference!)

Amy: At your more recent live shows, have you played mostly the songs from the new album, or do you mix in a lot from your previous 3 as well?  What can we expect from a live Hat Madder set at the Melody Inn?

Amy: We are truly excited to see you play at the Melody Inn Friday, October 5th with Sugar Dust and Middle Class. Thanks for taking the time to answer some questions.

THM:  My pleasure! Thanks for doing what you do. Cheers! - Isaac