The Untidy Nine Conspiracy Part One: Whatever Happened to Tim Spainhower? 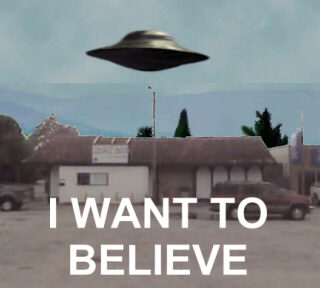 I had a funny experience at the bar last night. I was in a discussion with one of the open mic players about some point of trivia involving a classic band's lineup on one particular album, or some such thing. Eventually the guy I was talking to realized his lapse in memory and said, "No, wait, you're right, never mind," at which point one of the other people at the table said, "Yeah, if you're going to talk about music with Darrin, you need to get used to saying that ... a lot." I relay this story both because I need to establish my credibility as a music expert for the, some would say "outrageous," argument I'm about to put forth, and also because it's the only cool thing that's happened to me in the past three months. Either way, by the time I reach the end of the tale I'm about to tell, I am certain you, too, will be saying, "You're right, Darrin."

I know a lot of musicians in this town. I don't know the exact number, but it's probably dwarfed only by venue owners, booking agents, and the phone operators who work at the depression support hotline. Lately, however, I've been noticing some pretty strange stuff going on in our music community. There seems to be a conspiracy of silence among many of our local players ... a very quiet conspiracy ... of silence ... that nobody seems to be talking about. It's permeated several different cliques, genres, and clubs already and, I believe, goes straight to the highest echelons of the local, independent music scene, the mysterious, secret group that secretly controls all live entertainment in the Indianapolis metro area, the people without whose knowledge and permission nothing happens in this town ... but more on them later.

The shades of the conspiracy can be traced back as far as ... well ... last week ... while I was checking in with popular local band Blue Tear. Astute followers of this penultimately important and influential musical powerhouse turned cover band may have noticed that, for the past several months, front man (and only remaining founding member) Tim Spainhower (Show #050), has gradually become less-and-less prominent in their promotional material, often being relegated to the side or back of group photos, instead of his customary spot in the center. Soon after this began, the band hired an additional, female singer. Why? Has something happened to Tim's voice? Then, most mysteriously of all, this latest, symbol-laden poster has been spotted in bars all over the West side of Indianapolis. 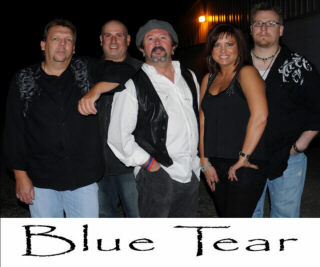 The photo clearly shows the entire band, dressed in black, as if for a funeral, and smiling ... except for Tim (far right), who is frowning. Only, is it really Tim? The "Tim" in this picture looks somehow different. Can you spot the difference? It's the glasses. Tim has never been known to wear horn-rimmed glasses before (horns ... as in the horns of the devil?). And is that his left hand in his pocket  as in the "sinister side." He's even standing over Melissa's left shoulder  the spot where the ancient Sumerians believed that evil spirits are known to lurk (hence the ancient tradition of throwing salt over your left shoulder). It's quite obvious that the revered Mr. Spainhower has been secretly ousted from the band and replaced with an evil look-alike. This is the easiest explanation for the change of glasses and need for a supplemental singer. Leo Thompson, the presumed mastermind behind the switch (pictured in the center, wearing a white shirt, black vest and cap -- reminiscent of an ancient Mesopotamian high priest of the afterlife ... coincidence?), is no doubt as I write this, frantically trying to get his imposter a vocal coach and a Lasik surgeon. As Tim is on my speed dial, I have asked repeatedly for an explanation over the past couple of months, but he denies anything is happening. It seems the impostor-Tim is not only using real-Tim's cell phone, but is also living in his house. A call to AT&T, the real Tim's place of employment, confirms that Tim has not worked there since July, about the time I believe the switch was made for "Evil Tim." Sure, I've heard the rumors that have been floating around saying that Tim has been attempting to follow in the footsteps of his idol, David Lee Roth, and is merely too busy pursuing a medical technician degree ... I don't buy it though. I know for a fact he didn't even buy the "DLR Band" album.

So, why was the real Tim taken out of the picture? Where is he now? What sinister plot is Leo involved in? Is he the originator, or merely a willing pawn? As near as we can tell, Tim's involvement began sometime around May, right about the time he, in confidence, nervously told me that he had found hidden messages in the lyrics of the latest Jenn Cristy (Show #12, Show #31, Show #62, Show #75) song. Apparently, when you play the song "Nevermind" backwards, the lyric "You're a scholar of what I am, something only you can understand" is clearly heard to sound like, "Dnatsrednu nac uoy ylno I buried Chad ralohcs a er'uoy." Seriously, download it here (iTunes | Rhapsody | Napster) and listen for yourself. It is also obvious that is the reason "Nevermind" was released in digital form only, despite the fact that it is a dance track, which would traditionally be released on vinyl. (It would be too easy for a DJ to spin a vinyl record backwards.)

Who is the "Chad" mentioned in the hidden message. Well, "Nevermind" was released just before Chad Mills' (Show #23, Show #74) "Make the Door" album (Amazon, iTunes, DigStation, Napster, CD Baby), possibly as a warning to Chad to keep quiet about his knowledge of the grand scheme. Was "Make the Door" his response to Jenn? Could he be referring to the door to his own coffin? Does he believe himself to be in danger from Jenn, Leo, and their sinister minions? No of course not. Any good Scrabble player, like Jeff DeHerdt (Oh, we'll learn more about him and his Scrabble talents later), will tell you that if you scramble the letters of "Make the Door" you find that it is an anagram of "The Okra Demo," which as any fan of the Indianapolis music scene will tell you, is the name of a long sought-after recording session/collaboration between Chad and the now-defunct hard rock band Heaven and Hell. The music they created could only be called "Folk Metal" and almost certainly would have revolutionized the industry and set the world on its ear. Only five copies are known to still exist, the rest were buried in Broad Ripple under the floorboards of the old Patio nightclub, and mysteriously vanished shortly after it re-opened as Spin Nightclub. With the cache of musical treasure finally unearthed, and no need to keep the illusion in place, Spin suddenly closed down under "mysterious circumstances."

Coincidentally, the last band to play Spin was ... Okay, actually we don't know who it was, but Vestiges of Ecstasy (coming up on Show #088) was playing at Birdy's that night ... ummm ... as far as you know. Now, this is where the plot thickens. I know some of you may not believe this next part. You may think I've gone completely off my rocker here, and I'm sorry if this shocks some of you or destroys my credibility in your eyes, but I firmly believe that Vestiges of Ecstasy is secretly Heaven and Hell ... in disguise ... perhaps some sort of Federal witness protection program ... I don't know ... they won't admit to anything. I know, you're doubting me right now, but hear me out. Obviously it would be impossible for Gregg Jones, as the tallest guitarist in Indianapolis (by about a foot and a half), to disguise himself without cutting his feet and most of his shins off, but he did cut his hair, which admittedly did fool me at first, but his playing gave him away. Guitar solos are like fingerprints to a trained ear like mine. It took a little more research on my part to firmly establish that his wife, VOE vocalist Mia Kileen (M.I.A. Killing?) is really Heaven and Hell singer Buelah Ludmilla Kowalski. I've tried asking her directly on several occasions, but invariably she goes off on some tirade about My Chemical Romance, old Buffy the Vampire Slayer episodes, or some all-girl band she's trying to form. It's obvious she's been hypnotically programed (or possibly lobotomized as the picture below would seem to indicate) to immediately change the subject to a random topic if her cover is in danger of being blown. Seriously, no normal, conscious mind could move this quickly. However, here is my detailed computer analysis of two photos proving that they are, in fact, the same person. 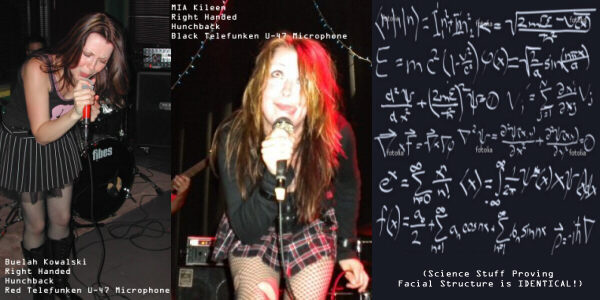 So why the intricate disguise? Did they discover something they shouldn't have? No, the real answer, I believe, is far more frightening, and lies within the cryptic lyrics found on "The Okra Demo."

Which is where we'll pick up next time ...