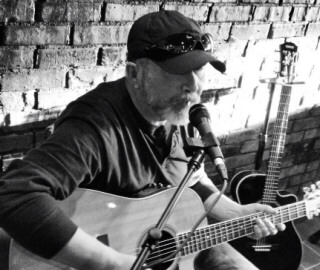 Kolo Bell is a local singer-songwriter and a fierce supporter of our music, comedy, and art scene. He has helped countless people on developing their crafts and more notably just how to believe in themselves. Ive heard Kolo say that, The most radical thing that you can do in this world is to give a voice to people who dont have one

For over five years now he has hosted a popular open-mic night at Claude and Annies every Wednesday evening. It has since been the origin for such great acts as Swig, Coy Koi, The Dead Squirrels, Michael Pearson, Megan Hopkins, and Angela Mullin-Jackson just to name a few. His event is also known to draw seasoned musicians, like Jack Barkley and Dave Vogt, who serve as a great inspiration for beginners and veterans alike.

I believe that he greatly enjoys the work of all the artist that frequent his open-mic even after all these years, and without the voices of the unaccomplished regular people it just wouldnt have any appeal to him. It is the combination of the two worlds side by side that makes it magical for him.

So the formula is simple: A cordial host who shows the same appreciation for everyone and sets that tone so that the audience becomes a willing participant in the nurturing nature of the event. A complete free speech zone where there are NO restrictions on language or ideas no matter how challenging that may be at times. And an understanding, stated and enforced by the host, that the only rule is respect. Shut up while other people are performing and stick to the allotted time.

Within the confines of this structure, miracles abound. Kolo has help established a working class musician community, and when you see that everyone is treated with respect and encouraged to tell their story it unleashes something contagious and beautiful. All those stories that these folks had no reason to believe that anyone would want to hear or would otherwise have taken them into the ground untold would have been, in his opinion, a tremendous loss to the world.

Over the years, the most jaw-dropping moments have come from this small community of musicians that embraces one another without condescension. Folks who see the world in a way that no one else can possibly see it. When a room full of poets and writers is floored by a line, from a person, that the rest of society either mocks or feels sorry for, that my friends is a moment to embrace. There is no doubt that without facilitators and hosts like Mr. Bell, these moments would have no place to exist and we would all be less as a result. You have done something radical Kolo, thank you.

Check out Kolo's own music here: Reverb Nation | Facebook and be sure to catch him this Sunday at the Copper Still in Noblesville.