In Depth: Tied to Tigers 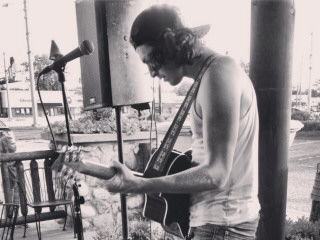 Musically, Tied to Tigers feels a lot more simple than Matthew Corkens previous group The Post Script. Do not get me wrong cause Script was a great group, but there is growth in this project and that contrast shows you how good Script really was a few years ago. The guitar with Tied dabbles in punchy-rock and frantic Mars Volta-like tendencies, and the rhythm section weave some unbelievable tight grooves. However what sets Tied apart from your average indie rock band is vocalist Matthew Corken. His croon, that can go from slow and earnest to mean and biting on a dime, is what gives their songs a touch of R&B flavor and Springsteen emotion.

There is a reason fans follow Matthew around from project to project. His lyrics connect with the audience, his energy fills the room and the music begs for attention from everyone in an earshot. He brings together influences of rock, jazz, and alternative music that is dynamic and engaging.

Matthew is a singer, songwriter, multi-instrumentalist and loop artist that offeres an exciting invitation for the musically adventurous to discover a boundless, transcendent world. A unique style driven by the integration of melodic, emotional and harmonic contrasts. Tied is a multi-instrumental solo act in which he utilizes live looping (live recording) technology to create an on the fly full band sound by layering guitars, bass, percussion, bells, beat boxing and other electronic sonic textures. I've been told there is a full band version of Tied as well, but have yet to enjoy that side of the project.

Matthews art of live-looping offers his audience the opportunity to see a behind-the-scenes-overview of how his music gets recorded in the studio, layer by layer. The listener actually hears music differently by having the ability to zoom in and out of the sonic picture. Zooming in to hear and see the individual parts and then zooming out to hear and see the whole soundscape.

The project is truly an integration of so many aspects of his life, with everything from his voice and body, to the new instruments and sounds, to the fusion of genres and styles. Never for a second will you feel that he isnt grateful and honored to be able to share Tied to Tigers with the world  both the music and the adventure of making it.

I caught up with Matthew in Broadripple a few weeks back to talk about his songwriting and hopes for the new project.

Why did you start Tied to Tigers?

The Post Script had ended and Tied to Tigers honestly kinda spilled over from that project. I really wanted to continue forward and develop more as a musician and songwriter. Really helped to have nothing distracting me at the time that Script finished up and being left to my own devices.

How has the experience been with the new project?

Been very enjoyable and feels very genuine to me.

What is one thing you wish you had known from the start, that you know now but didnt know then?

Sound. I wish I had know better to keep things simplistic early on instead of trying to create something I imagined would be great, but instead would turnout over complicated. I also wish I focused on a more define structure of songwriting in the start.

Most satisfying part of your new journey?

Performing the PBS special was an extremely cool experience. We got to setup at the studio, play a few songs on national television, and they were very supportive of us. I also took a year off from performing live to just focus on writing and finding a sound for Tied. Now to be playing out with this material a year later, I find the whole thing to be very rewarding.

Least satisfying part of this experience for you?

Being a bit unrecognized thus far having taken time off after Script to focus on writing. Outside of good friends its been a challenge to reach new fans and build support for Tied to Tigers, but its going to happen soon enough. I believe in this project and these songs, and look forward to connecting with people again.

What do you write about and motivates you?

I write about my personal experiences and struggles, but find happy beats for heavy lyrics usually. I love to connect and feel that Im contributing to this changing landscape of local music in Indy, that motivates me. I want to be apart of the commotion. I want to create an atmosphere that is contagious for anyone and everyone to take notice that something special is happening around here.

Do you have a mentor that has helped you achieve your recent success?

My mother, Lori Corken, who inspired me to play and to chase down my dream of being a full-time musician. My mom and my father want this life for me, and that support supplies the courage and fuels the passion for this musician to play on.

First time I saw Tied to Tigers was at Birdys with The Cosmic Situation and Black Market Binary. All three acts were brilliant in their own respective, but Tied was a one man wrecking ball that left the audience wanting more. That evening, those three acts, really centered Friedrichs quote for me, Without music, life would be a mistake.

You can find Tied to Tiger on Facebook and Reverbnation.