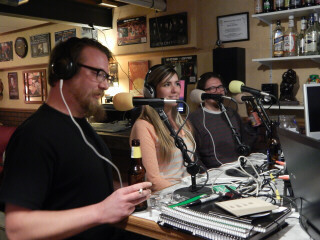 Day 2 was slightly more productive than the previous day.  Spent the afternoon working with Irish on the inaugural episode(?) of "The Soundcheck ... With Irish." (Tangent: Did you know our lawyers said we have to always include the last part of that name so you don't mistake us for that hipster Village Voice knockoff's half-assed local music calendar that is really neither local nor music-related?)  Only took about four hours to record the first hour of his show, which really only involves 10 minutes of his actual talking in between tracks.  Should be pretty exciting stuff.  He's a little dry coming out of the gate, hopefully we can get him to inject a bit of personality into the show, rather than just announce what track he's about to play.  I know "radio personality" is a relatively unknown thing to you kids these days, but back when I was growing up, radio was almost as much about the DJ as it was the music.  Heck, DJ's had me convinced disco was cool, when it comes down to it -- okay, I was 8 ... and impressionable.  Nearly four decades later I still remember the voices -- Dennis and Glenn in the morning, Marty with the Party in the evenings, heroes like Casey Kasem, Kenny Everett and Jonnie King  who were actually syndicated shows, but at the time I assumed they were crazy guys that hung around the studio break room with everyone else.  These days I can't even tell you the name of the guy I've been listening to on the drive home for the past three years, because he just isn't registering with me as anything other than a voice that announces the next track  right after the fifth commercial break of the hour.

With Irish's first hour firmly cemented into the hard drive, we switched gears and were were paid a visit by the cast of the Chris Brake Show, a new podcast in town that bears your attention.  Obviously, I am a sucker for startup podcasts, and particularly freeform podcasts, so I invited them up to sort of collaborate, do a double-episode of our respective shows (My 151st, their 13th), and see if the personalities and creative processes jibed well enough that we might collaborate on something down the road.  Heavens knows I've got 41 cards in my Springpad notebook that need somebody to run with them. (Yeah, I added a few this morning  it's a sickness  and aren't you astute for noticing.)  The show was an interesting experiment, as those of you who listened in to the live stream will attest, I'm sure.  Although, I think we bored a couple of the cast members, so I'll just assume you guys hung in there.  For the most part, however, I think we all had a good time.  We got about three hours of random stream-of-conscious conversation recorded.  They will get a copy to edit, and I'll keep my copy to edit.  It should be interesting to see how far apart the two episodes end up.  Look for them coming soon, it should be Show #151.

This also cemented my suspicion that I really need to do a freeform podcast, even if it's just an audio version of this blog.  Ideally, I'd like an ensemble crew though.  I cut my podcasting teeth on shows like Wingin' It, Deadpan, Zedcast, and a host of others that were never really about anything other than people just sitting around talking about random topics.  Much like the aforementioned radio jocks, I completely latched on to these characters and made some sort of connection anyway  whether it's real or completely in my head is the delicate balance between rabid fanboy and creepy stalker that I walk.  While I've loved the whole podcasting experience for coming up on eight years now, I often feel I sold myself short by going with a structured format and topic.  I really need to stretch out into improvisational audio.

And that's how card #42 got added to the notebook.