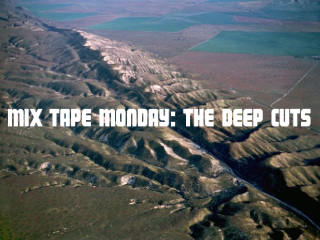 If you speed any time around in me in real life, then no doubt I've mentioned my most awesome radio find of the past year, Class X Radio, from just around the corner in Cincinnati. I mean aside from an entire hour show dedicated to obscure Pink Floyd cuts, this station mostly revolves around the "album cut" format, going deep into a popular band's catalog and pulling out fantastic tracks that for some reason or other, Q95 just won't play ten times a day. I've introduced quite a few people to this station over the last couple months and everyone really gets into the "who can name the song" first game. Sometimes we don't even know the song, so we try to at least guess the band. VERY occasionally we don't even know who the band is. I mean, what are you supposed to do!?

Speaking of which, have you guys seen this app called Shazam?! You just press the button and it listens to the song and tells you what it is. I never understood why anyone would need that until I discovered Class X. (By the way, that's sarcasm, I've used Shazam on jazz stations for years ... please don't email me.)

So, this week's mix tape revolves around great songs by popular artists that were lost to time because they weren't released as singles, never made it to the greatest hits album, and you kids these days never go back and listen to the original source of songs you like.

The Rolling Stones: Monkey Man Well, this one might be stretching it. They do play the song on most tours. However, since they don't tour often, and only the die-hard fans can afford to take out home equity loans to go see them, I'm gonna say it's lost to the casual listeners.

Fleetwood Mac: Hypnotized Sometimes I think I'm the only person who knows Fleetwood Mac had like ten albums out before Stevie Nicks joined. Funny though, they only had a couple of minor hits out of those.

Steely Dan: Doctor Wu I think I just love Steely Dan because the band seems to write a lot of dark and evil stuff, but with twisted humor and sarcasm. "All night long, we would sing that stupid song, and every word we sang I knew was true," is one of my frequently cited quotes.

Another Star: Stevie Wonder Not that you can't randomly pick any Stevie Wonder song and it won't be great, but I hear this one a lot less than others.

Heart: Mistral Wind Seriously?! Q95 can make me listen to "Crazy on You" and "Magic Man" six times a day. WJJK gives me more of "These Dreams" and "All I Wanna Do" than I will ever need in my life. But damn, this is Heart in their heyday, doing to their most Zeppelin-esque wailing. You can't beat this!

Eric Clapton: Mainline Florida Why this wasn't one of his big hits, I have no idea. It's a much better groove than "Cocaine;" catchier hook than "I Shot the Sherif."

Doobie Brothers: Ukiah This one threw me when I heard it, and I had to use that Shazam thing. I guess it's some period of the Doobie that I didn't listen to, and the synth at the beginning through mew off. Great track though.

Styx: Queen of Spades Styx is one of those bands where I like their hits, but I LOVE the other stuff that didn't become a hit even more. This one has one of my favorite guitar solos plastered right in the middle.

Ball and Chain: Big Brother and the Holding Company It must have sucked to be in this band, because they were genuinely great without their singer. And it must have sucked to be their singer, because she was great, but constantly gets butchered by suburban karaoke housewives who think they're doing justice to "Bobby McGee" and "Mercedes Benz" with their off-key, nasally, wince-inducing version.