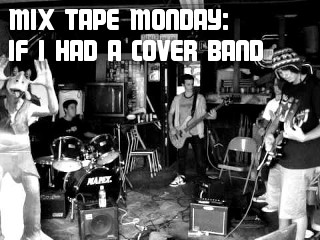 I don't have a cover band. I haven't even really been in once since Blue Tear, and really that was an original band that played some covers because we did three hour gigs with only an hour of original material. In fact, between the two principal guys, we probably had a day and a half of original materal, but we wanted gigs, and it was Greenwood, so we did the obligatory Sweet Home Alabama thing ... though I seem to remember Mark sang the lyrics to the Brady Bunch just to piss some girls off.

Anyway ... for those of you who haven't ever been in a cover band, when they form, it's usually a bunch of drunk guys at 2AM that decide they want to start a cover band ... or a podcast ... in this case, a band. So the next question is: what music do we cover. (Mustang Sally, Brown-Eyed Girl, and Wonderwall come pre-packaged with all new cover bands like Super Mario 64 and Pilotwings 64 did with your first Nintendo. In most cases people start throwing out lists of a dozen or so songs, and everything gets put to a vote as to which ones everyone has to go learn.

Now, the trick I learned, as the keyboard player, is that some of what you want to play is going to get picked regardless. For example, in a five person band, at least three will pick "Don't Stop Believin'," so save a slot and don't even put it on the list. Now of course no (male) singer is ever going to allow a Yes song to make it into the set, so those are automatically out, and the bass player or drummer will usually pick a good Stevie Wonder or some other 70's hit, so don't worry about picking anything funky. Instead, I would submit a well-crafted, ultimate fantasy set-list of self-induglent tracks, mostly keyboard-oriented -- but I hold out hopes of getting to play rhythm guitar on stage someday -- and it would look a little something like this...

Elton Johbn: Funeral for a Friend / Love Lies Bleeding It opens up one of the greatest albums of all time, why shouldn't it open my fantasy show? Bonus, the singer can drink another beer while the band plays and then make a grand entrance. Bigger bonus, on a good day, I can sing this pretty well, so he doesn't have to even come up until the second song.

Meat Loaf: Bat Out of Hell I remember getting a bug up my butt one night and watching a YouTube video on how to play this intro (first time I'd ever done that). By the time I had a good handle where I thought it was learnable, I realized there is NO point in learning this, because there is NO SINGER in Indiana who can pull it off. Unless I want to add a karaoke housewife to the band, but that's just another cut we have to share.

Fleetwood Mac: The Green Manalishi I am THRILLED this version exists on YouTube. I grew up with this Bootleg, and it's EXACTLY the version I would want my band to play. That guitar solo/keybaord drone/coked-out Stevie wail at the end is GOOSEBUMPS! Need to have that.

Joe Cocker: Feelin' Alright I remember doing this in Ida No as a Peace Frog/Feelin' Alright/Oy Ye Como Va medley. So much fun to play. Basically two chords and a groove. You can't mess it up, and it's really hard to get lost.

Argent: Hold Your Head Up Mostly because I know I can't get a band to play "Lothlorien," but "Liar" is also an acceptible answer. Can't I just take a moment here to say how watching this band makes me wish I had a band?

Pigeon Detectives: I'm a Liar Not a keyboard track at all, and it may be the way my brain works, but I really hear a Hammond on the chorus and solos ... though it's probably just a guitar harmonic or artifact of some sort.

ELO: Hold on Tight Makes a great closer for the gig. I've always wanted to see what the crowd response would be to this.

Allman Brothers: Whippin' Post What's that? 20-minute encore full of guitar, drum, and keyboard heroics ending in a fiery explosion that doesn't leave a dry seat in the house? Don't mind if I do!