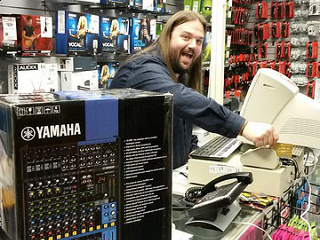 Unrelated:  Blogging via phone from a barstool sucks, by the way.  I normally have a portable bluetooth keyboard for this, but today I'm all thumbs.

Just when you think you're getting ahead of things ... boom.  So I'm working on the non-Indy In-Tune related audio project last night.  Not surprisingly, this requires me to adjust some of the settings on the console mixer that I otherwise would never touch ... and in fact CAN'T touch ... unless I take a picture of the board ... because I can never remember how to set everything back when I'm done.  Anyway, as soon as I touch the main fader, I notice it's a bit ... erm ... stuck.  I mean, it moves, but there's some definite resistance there.  Apparently over the course of a few months now, something has been spilled in there.  Not sure what, but as I don't generally touch the fader, it could go back to the infamous "black IPA spill" from the Radiothon last month.

Anyway, as anyone who knows about spills and mixing boards will tell you, needless to say suddenly my 8-channel board was turned to a 4 channel board with two additional, unreliable channels, depending on how you've managed to jiggle ... flick, pound, spit on, or wedge little pieces of paper under ... the master fader.  Okay, so for recording, it's extremely annoying but workable with ten minutes of experimentation resulting in a couple of cardboard coasters folded in half and shoved under the switch.  For live broadcasts, however, a visit to our sponsor is in order.  (See photo insert above of General Manager of the Year, Jamie Jackson, taken just hours ago at Sam Ash Music, 8284 Center Run Dr, Indianapolis, IN 46250 ... drop in tell them Indy In-Tune sent you ... in fact, whisper it to the door girl like you're making a drug drop.  If she slaps you, I owe you a beer; if she hugs you, then you owe me one.  This is a little game I like to call Chat Roulette, though I'm told the name is taken.)

What the fuck?  Who needs breaks on their SUV, right?  And at least he gave me a really good deal and bought me a beer afterwards.  Any chance he get to get his grubby little paws on my assets he's there with bottle in hand and leg up, I tell ya ...

Anyway, I was perusing an antique furniture store this morning and found an old, worn-out rocker.  He said his name was "Sammy Hagar" and he's playing Carb Day this year.  Not that I have anything against Sammy or wish to discount any of the Red One's past accomplishments, for those of you who wish to live in the now, here what I have so far for the definitive Race Weekend local music calendar.  Feel free to update me with the show's I've missed.  I know this can't be 5% of them, right?