An In-Snide Look #354: Wherein We Kick Off The Studio B Sessions 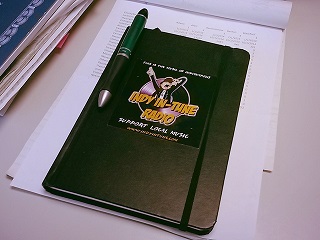 So, those of you who follow the blog, know about "The Little Black Book of Indy In-Tune" -- the grimoire of ultimate wisdom that secretly powers Indy In-Tune behind the scenes. Ensconced in its pages are plans, notes, thoughts, doodles, sketches, big initiatives, small schemes, dirty little secrets, and shitloads of lists about anything and everything that crosses my brain concerning Indy In-Tune. One of those pages contained long-held plans for turning Studio B into a small venue for the proper radio and video streaming of live performances on a bi-weekly, or possibly weekly, basis. Basically, taking house concerts to the next level.

Why? Well, there are a couple of reasons.

First of all, Shine is doing a fantastic job bringing music to new venues with its myriad series. Unfortunately, the size of the local, independent music fan base isn't growing quite as a fast as Shine has been. So now we are in a position where there are more and more events, but same number of ears divided up between them, which means that booking live music is rapidly becoming a fight for a dwindling slice of that righteous "fan ear pie" (try and get THAT image out of your head). This became apparent during the last PodConcert when Shine and I had both inadvertently booked the same lineup for October's LocalLove and September's PodConcert VIII only two weeks apart. Then, it was further reinforced when Shine graciously did not promote their own "Shine on the Rocks" show that night (at the expense of an artist friend of mine) in order to avoid competing with Indy In-Tune. Bless those big-hearted boys.

Second, the venues kind enough to host Shine and Indy In-Tune are businesses, and while we're grateful for every one of them for giving Indy In-Tune a home over the years, it's safe to say that Indy In-Tune's goals and measurements of success are generally not aligned with the venue's goals and measurements of success. We're looking to advance the local music scene in any way possible; they're looking to sell more beer. Now, you would think there's a lot of common ground there -- you know, people like music, they stay, they drink more beer, no problem -- and really, most of the time, there was no problem. On the other hand, nothing freaks out a venue owner faster than saying, "I don't know if your suburban sports bar audience is going to like my in-the-round bill of a jazz pianist, a rock player, and a quirky/funny singer/songwriter, but I really want to see what happens." (No, seriously, that was an actual conversation ... and an actual show.)

On the other hand, if I controlled the venue ... 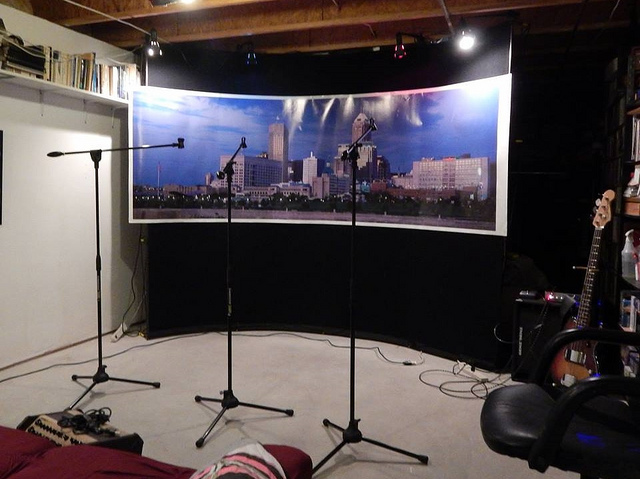 To that end, we announce the next big experiment: The Studio B Sessions. Here's what I'm thinking ... or was thinking ... it's all in that black book:

Well, that's the plan, anyway. We'll be doing a test run with our two favorite guinea pigs, Kolo Bell and Whoa!Tiger tomorrow night at 7PM. So, why not make plans to tune in to Indy In-Tune (your choice of radio or video) and see if we end up failing miserably or upping the ante a bit.