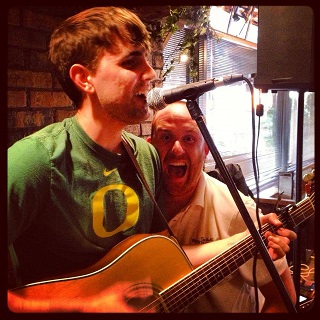 Steve Boller has great melody and spot-on timing, both of which he puts to good use in an EP set of pop tunes called You Can Always Try (iTunes | Bandcamp), most of which sounds like lost radio hits from a variety of decades. The cool thing is that the songs you've never heard of before sound just as good as the hits he's covering when you catch his live show. If you were lucky enough to find a seat for his album release party on August 24th, then you know exactly what I'm talking about, but if not then choose to see his live set sooner than later. This Indianapolis singer-songwriter has a voice that's deserved to be heard, and since being discovered nearly two years ago, he has done anything but lay low, garnering for his jazz meets pop signature sound. It is simply impossible to ignore one of the better songwriters to come out of Indianapolis in recent years.

Off his new EP of self reflection and love songs, Boller opens with "Change Something" a smooth bit of acoustic pop, built around guitar playing and a welcoming percussion beat. The next track, Times Melody drops you off at the local cafe for an afternoon of coffee and great atmosphere. You can't help but enjoy the instrument arrangements and backing vocals that set the tone for his next track. On "Life Seems True" he gets into some pretty pure pop territory not so far from Jason Mraz in sound and approach but a true highlight on the project, and a sign of great things to come.

It's Okay, I Love You, steps away from Boller figuring out his place in this world and points its focus in a direction that makes everything else seem to fall away. This is a great love song that leads into this final track, Choose to Hope that nicely pulls the whole EP together and reminds us that a positive approach can change something if not everything. The overall result is an album of bright, uptempo songs all written by Boller and sung with confidence and charisma (and a top-notch piece of production work for a remarkably clean sound).  He is one of those musicians who just won't fit neatly into any of the existing categories. Is it Pop? Is it Jazz? He writes quirky little songs that reside somewhere between the pop-folk of James Taylor's generation and the power pop of the '80s and '90s. Singer-songwriter probably fits better than any other label, although that's more of a description of the creative process than of the resultant music.

Like most musicians who can't be placed into the ready-made slots, Boller's music is far more interesting than that of most Top 40 acts in my personal opinion. Possessed of a warm, slightly original and charming singing voice that reminds me more than a little of Eric Hutchinson. His compositions themselves are so perfectly constructed that they can't help but draw comparisons to the best pop songs of the rock era. All of the above combine to create another collection of unforgettable songs given a lovely glow by Boller and his backing band of musicians.