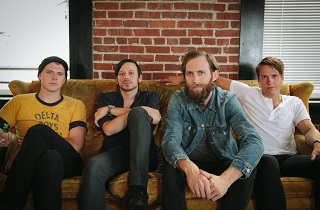 MODOC set the bar at a staggering high early with their mesmerizing self titled  second release on August 27th of this year. They have honed in on the ability to snatch your hand, pull you in and make you listen undistracted to a smorgasbord of simplistic yet refreshing sounds. They manage to offer the listener an instantaneous emotional drawstring that reels you in so effortlessly.

Theyre letting their music speak louder for them than a press release or the critics, of which one should have boundless respect for.  Hence the constant replays and vigorous nodding every time they re-appear on my iPod.  Personal favorite is Fortune & Fame, an absolutely beautiful song with a combination of raw guitar playing, upfront vocals, and big drums. They relay layered textures of reverb, slick bass and steady builds that never let go and you dont want them to anyways.

When you take the time to listen to the words you find there are some heavy feelings going on about relationships and life. We all can relate to these topics but sometimes struggle to convey those emotions. Powerfully this group of musicians can do just that while entirely in harmony with one another. They are a band that follows their lead singer, feels what he feels, and then translates all of that through the music. When everything clicks on all cylinders for a band, it can be a poignant and beautiful thing.

I was able to catch up with lead singer/guitarist Clint Culberson awhile back and learn more about the band and their journey thus far.

Give me some background on the band and your name?

We are four best friends. There is myself, Kyle Addison on lead guitars/vocals, Caleb Crockett on bass/vocals and John Carlson on drums/vocals. We first met through the music scene at Ball State University in Muncie, Indiana. I had previously lived in a nearby town called Modoc. We had gigs before we had a name so I suggested the name during a band meeting

What album defines the musician you wanted to be as a kid?

What album do you own that you dont want people to know you have?

Ummmm, Ace of Base, The Sign

Why did you start this musical journey in the first place?

I graduated high school and was really just trying to find myself still, wanted to discover my true possibility in this life. I was trying to remove myself from a dark place after my parents divorce and Rock n Roll was a avenue for me to have fun and release the pain

Amazing. A lot of hard work, but just amazing. It helps that I get to do this project with my best friends. Im still growing though but could not be happier than I am right now with this music, this band, and this opportunity

What is one thing you know now that you wish you had known at the start?

What has been least satisfying about being in this band?

Not having roadies. Its a lot of work after you just put on a great event and rock out all night to immediately have to turn around and start packing up. It would be nice to relax right after but its part of being a musician

What recent accomplishment are you most excited about these days?

Our fan base in Nashville,TN and how far we have come to build the foundation down there

Evolution is defined as a process in which something passes by degrees to a different stage (especially a more advanced or mature stage). Rarely can anyone be present for such an event, regardless of how well he or she plans the timeline. It was a warm summer night at Radio Radio in Fountain Square, when I was witness to one such event. Since the last show I saw them I knew it would be a good set, but I didnt expect to see such growth. The guitars started wailing and the drums started thumping, but there was no sign in the air, there was no warning signal, there was no heads up. There was just this moment, this final explosion, an emergence of a great band.

The albums are strong and demand attention, the live show will breath life into your hopes and dreams of rock and roll not being dead, and the band themselves will makes sure to thank you personally after the show for your support. Whether you become a fan of the band or not, I know everyone appreciates showmanship, the feeling of actually giving a shit about how an audience leaves. This was not only a show but an experience. Welcome to MODOC my friends.