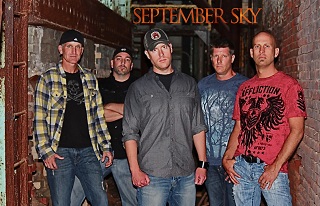 Mindful heavy metal group, September Sky returns with a new album this week, and a CD release party Saturday, September 7 at Birdy's.  Thus a new chapter is marked in their modern tales of epic bombast-ery. On Letter to Fear, the remarkable second EP release, the guys refuse to hold back, brazen in duplicitous use of their utterly measured, raw musical tendencies, and talents.

Fans of their first album, Bright Skies to Dark Days, will hear a lot of familiar elements in solid, driving tracks such as My Ending and Letter to Fear. Tobias Konnersman finds a very steady, comfortable fit as the new keeper of the lower register alongside drummer Martin Baker.  The two of them keep the songs firmly rooted in a down-tuned modern hard-rock style, playing something of a musical tug-of-war with the dual attack of Larry Criag and new lead guitarist Mark Lenz (ex Outer Sanctum) who takes advantage of the entire fret board with a flash and melodic sensibility that is more reminiscent of the music a few decades prior (see also: the last 30 seconds of Wind and Waves).  Singer Scott Bernhardt tones down a lot of the screaming found in the first album, though he does still a couple tasty ones in on tracks like Fallacy.  This time around the use of harmony seems much more prominent and does a lot towards moving the vocals from "angry young man" to a hrefined, matured eeriness.  The result is a hybrid of modern hard rock and classic metal that should appeal to fans of A Perfect Circle and Disturbed as much as it does to fans of classic Iron Maiden and Ozzy Osbourne.

This isn't a band that needs to cover up its lack of songwriting skills with sonic razzle-dazzle. Sure, there's accoutrement, but it's all just dressed up subtext. The main course is the melody and it turns out their skills stink of authenticity.  September Sky has the right chemistry and passion for success and Letter to Fear stands as the best version of themselves to date.