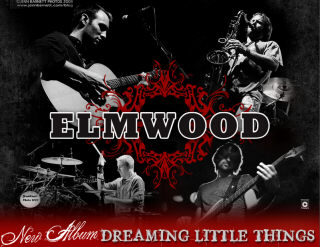 Nashville, Tennessee's Elmwood returns to Indianapolis at the Rathskeller on Thursday, September 9th.

Formed in 2008, Elmwood has quickly become one of the Southeast's most sought after live bands after dates in 2009 with G. Love and Special Sauce, Tea Leaf Green, Blues Traveler, Pat McGee Band and side-stage performances with the Dave Matthews Band. Ending the year on a high note Elmwood supported O.A.R. through October and November playing theaters and small arenas.

The story has continued to build in 2010 with a Tea Leaf Green tour in January through March, and highlights including dates with Grace Potter & The Nocturnals, Blues Traveler, The Wailers, being invited back for side stage performances with Dave Matthews Band, and festival performances such as Bonnaroo, Beale Street Music Festival, and Warrens Haynes' Mt. Jam.

Their music is hard to put in one category. Elements of rock, pop, funk, soul and jazz permeate the songs creating a different experience around every corner. The band however truly shines with their energetic live performance.

Singer and guitar player Rusty Kelly and bass player Nash Johnson met in college where they started performing together as an acoustic duo. Sax player Derek Haight and drummer Donnie Marple came on board after responding to craigslist ad's looking for musicians. Derek came from four years of international touring, playing over 50 countries, and Donnie coming from his 2007 win of the Guitar Center Drum-off (do yourself a favor and check out the mind-blowing video of his winning solo on youtube!) where he was crowned best drummer in the US.

Following in the footsteps of the many bands before them to build a career on the road, the Elmwood guys look forward to the next few years getting to know the inside of a van as they criss-cross the US bringing their mindblowing live show to anyone and everyone who will listen. If the reaction from fans in the first year is any indication it won't be long before you are converted after seeing their high energy and musically inspiring live show.